Four years ago today, a bomb hit the ex-pat-frequented restaurant, Ethiopian Village, in the Kabalagala district of Kampala, Uganda, killing and wounding several people who had gathered to watch the World Cup final. Moments later, two bombs ripped through the Kyodondo Rugby Pitch, killing dozens of spectators and wounding dozens more. The bombings were carried out by al Shabaab, who had threatened Uganda ever since its intervention in their war in Somalia. Pretty much everyone called it an act of terror.

A month ago, gunmen blasted their way through hotels and a police station in Mpeketoni, Kenya, while some guests were watching the World Cup. They proceeded to split up the residents and killed the men.  The U.S. State Department said that “there can be no place for horrific acts of violence such as this in any society.”

Yesterday, a cafe in Gaza was completely destroyed in the early morning by Israeli rockets, killing those who had gathered to break their fast and watch the World Cup match. Israel has been launching a huge operation into Gaza in response to rockets fired by Hamas. There’s less unanimity on the terrorism of blowing up spectators here, as Washington is pretty firm in its support of Israel.

If you’re an insurgent or you’re Muslim, bombs are condemned, but if you’re a state and a U.S. ally, it somehow becomes much murkier.

Today is the one year anniversary of the World Cup Bombings in Kampala which claimed over 70 lives. I wanted to put together some sort of post to mark the occasion, even if only to remember the incidents and the lives taken. Last year, I put up a blog post about it at the time, but was pretty bewildered. 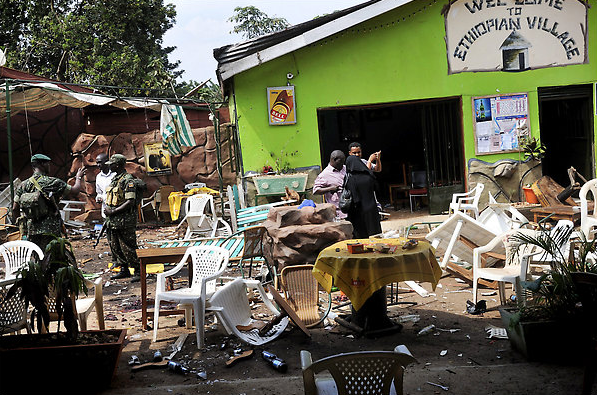 For those who don’t recall, one year ago two sites in Kampala were bombed by Somali insurgent group al Shabaab. The attacks hit the Ethiopian Village, a restaurant frequented by Westerners and a place I planned on visiting. I drove by the restaurant a few weeks later and the compound was boarded up – haven’t heard if it ever opened. The attacks also hit the Kyadongo Rugby Club, a field that had been filled with seats and screens to house a viewing party. The attack was in response to Uganda’s involvement in the African Union’s military presence (AMISOM) in fighting for the transitional government in Somalia against al Shabaab.

So, how much have things changed since? In May, some groups reported worries that al Shabaab attacks loomed, but it led to some debate over whether the government had reliable evidence of attacks or if it was exploiting the attacks to dampen contemporary protests over fuel prices. Al Shabaab is still fighting against AMISOM, but there is some speculation that they’ve expanded outside of Somalia. The East African had a report on prospects of expansion due to several conflicts along the Somali-Kenyan border. It seems that al Shabaab is definitely pushing its weight around even though it’s still in the middle of fighting against the transitional government, but the question remains: are another series of bombings on the scale of the World Cup Bombings possible?

In the days since the World Cup, there’s been a lot of confusion and hearsay. I heard confirmations that a bomb was deactivated in an area in southeast Kampala. Also heard unconfirmed reports of a bomb being deactivated at a petrol station. I know a lot of expats in Kampala are (understandably) worried and are trying to get out of there. Lira has been quiet, but most of us have an ear to the south and an eye on the news. My basic plan of action is to avoid Kampala until it’s time to leave, and then figure out exactly how safe Kampala and Entebbe will be.

In the meantime, things are maintaining regularity here.  Still no work.  Hope was actually really angry about not having funding yet, and when she found out just how soon I’d be leaving she was even more unhappy.  I ended up asking around and nudged myself into possibilities.  Yesterday I seconded myself to International Lifelife Fund and helped Alison with data entry.  It was nice to have a longer workday with actual work and also be able to hang out with her and Ama.

ILF has a sort of two-pronged program, and I was helping the environmental department which sells fuel efficient stoves to people (the other is sanitation with wells).  The stoves, called okelo kuc, are portable and use less charcoal and take less time to cook.  The environmental department oversees stove distribution and do surveys.  When I was in Gulu I ran into ILF doing pricing surveys, asking people in Gulu town how much they would pay for them.  Yesterday, I did some data entry including information for potential vendors of stoves and a small stack of the aforementioned pricing surveys.  If you want to learn more about the stoves, there’s a bit on their website.

Yesterday there was also some torrential downpour – it reminded me a lot of the occasional insta-storm back home.  I ended up moving with Alison and Ama and watched a movie before Alison and I double-teamed a pasta and bruschetta (she led, I followed) before watching another movie and then I proceeded to crash there.

Today I’m probably doing some more data entry, and tomorrow I’ll be shifting to another volunteer opportunity where I’ll help a woman who is running a really small nursery school.  The last half of this week is proving more beneficial than the first half of my 2 month stay in Lira.  Plus, I’m always on call from Lisa for when the UNOHCHR goes into the field.  Supposedly, funding will come through next week for NACWOLA, but I don’t know if I believe that or if programs will start right away.  I think I’ll be bouncing back and forth for a bit – but I’m glad to be productive!

Sunday night, I was with Lisa and Ilaria when we got a text from Susan, who was in Kampala, that there were two explosions at clubs during the World Cup. From there we called everyone we could to make sure people were alright, but we knew very little and couldn’t get ahold of everyone.

Over the next 24 hours, it’s sunk in more and more. In the morning I found out that more than 50 people had been killed, and I got confirmation of what Lisa had speculated the night before – that al Shabaab had done it in retaliation for the AU troops in Somalia. It wasn’t until the early evening that Monica told me the restaurant hit was Ethiopian Village, her favorite restaurant and a place I probably would’ve visited before leaving. It was a while later that I found out that the one American killed, Nate Henn, was a former IC intern and was close to a lot of my friends. That’s also when I found out Tony had been with him. It wasn’t until Tuesday that I found out that Brian and Susan had been at a bar just 500 meters away from the rugby club.

The attack gradually sunk in more and more as the day went by. With internet only marginally working and running out of time on our phones, it was all I could do to make sure my parents and Kim knew I was okay.

It’s an eerie feeling, being here – even in far away Lira. I mean, when 9/11 hit I was thousands of miles away and had never been east of Missouri. I knew people who were in England during 7/7 and in Moscow during the train bombing earlier this year. For me, I had been in Kampala just seven days before, in the same area. If I had found myself in Kampala during the World Cup, I wouldn’t be surprised if I had found myself close to one of the two places hit. It’s surreal to know and think these things when you’re just a few hours away and know people who were directly affected. I’m glad I’m safe and everyone I know is safe, but my thoughts are with all of those who weren’t so lucky.

For those that are worried, I’m safe in Lira – a small, northern town that’s presumably not an attractive target to foreign militants concerned with mass gatherings. I’ll be remaining up north for the next few weeks, but will inevitably be in Kampala for at least a couple of days before my departure. For now, all is well in Lira town.