Sallie Gardner at a Gallop by Eadweard Muybridge.

Yesterday’s Google doodle was a brilliant celebration of photographer Eadweard Muybridge’s birthday. Muybridge is most well-known for his work in recording animals in motion, specifically the horse’s gallop – which simultaneously solved the question of the manner in which horses gallop and pissed off Governor Leland Stanford. I told my wife about it, as she loves photography and is studying art history – and because it was a really cool feature. Not only had she already seen it, she had already clicked through and perused the accompanying Wikipedia article, informing me of this interesting bit of history:

In 1874, while still living in the San Francisco Bay Area, Muybridge discovered that his young wife Flora had a lover, a Major Harry Larkyns. On 17 October, he sought out Larkyns and said, “Good evening, Major, my name is Muybridge and here’s the answer to the letter you sent my wife.” He shot and killed the major pointblank.

Muybridge was tried for murder. His defense attorney pleaded insanity due to a head injury that Muybridge had sustained following his stagecoach accident. Friends testified that the accident had dramatically changed Muybridge’s personality from genial and pleasant to unstable and erratic.

Ultimately, Muybridge’s insanity plea was dismissed, but the jury found the incident a case of justifiable homicide (which is… interesting). Regardless, we got to thinking – how early did the insanity plea enter our courtrooms? And I don’t mean convenient pleas of temporary insanity (like, say, Congressman Daniel Sickles) – Muybridge (also known as Edward James Muggeridge, Eduardo Santiago Muggeridge, and Helios) exhibited some eccentricities.

There are instances of people of unsound mind committing crimes throughout history, of course, but instances of declaring a defense of insanity took a while to reach the tenuous place we are today. In 1764 a British man named Edward Arnold was tried for shooting at Lord Onslow allegedly after he had been bewitched. He plead insanity, and it was in this case that the judge asked the jury to determine whether Arnold had the mental capacity and reason like that of a wild beast or infant – the apparent measure of insanity at the time. Arnold was found guilty and sentenced to death, a sentence which was commuted to life in prison at the behest of Onslow. In 1840, Edward Oxford tried to kill Queen Victoria and was acquitted by reason of insanity, under the notion that he could not resist the impulse to fire due to lack of mental capacity.

After an attempt to kill the British Prime Minister in 1843, a panel of judges drafted the M’Naghten Rules, which answered hypothetical questions that gave an outline of the insanity plea and its application, including that the suspect be unable to determine the difference between right and wrong or did not understand the nature of the alleged act. Most common law countries used these guidelines until the 1950s, when the American Law Institute issued the Model Penal Code that established that the defendant had to have “substantial capacity” to understand the crime and criminality in order to face trial. 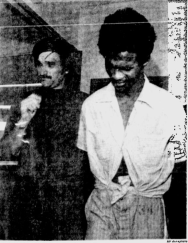 Alvin Ford is escorted by a police officer. Photo from Associated Press.

After John Hinckley tried to kill President Ronald Reagan, the Insanity Defense Reform Act of 1984 was passed by Congress. Unlike the assassination attempts in England that led to updates to laws concerning the insane, Congress’ response to Reagan’s close encounter made it much harder to be found not guilty by reason of insanity, placing more stringent rules on evidence and placing the burden of proof on the defense. In 1986, the landmark Supreme Court decision Ford v. Wainwright argued that the insane cannot be executed, however in 2005 the Court upheld a state’s rights to limit expert testimony to the insanity defense (thus not qualifying to determine criminal intent) in Clark v. Arizona. There are whole states that have actually banned the insanity plea, bans which have so far been upheld in most cases.

We’ve come a long way since Dorothy Talbye was hanged after God told her to kill her daughter. But the insanity plea is actually quite rare, and very difficult to use – even when it actually applies. It’s just a small part in the overwhelming societies that marginalizes, institutionalizes, and incarcerates the mentally ill.