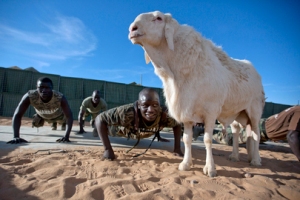 White Until Proven Black: Racism in The Hunger Games.

Playing the blame game with the cholera epidemic in Haiti.

Despite massive budget cuts, there’s a building boom in our universities.

Al Qaeda is probably not coming back to New York anytime soon.

Lindy West re-watched Titanic so you don’t have to.

George Zimmerman and Robert Bales: The Watchmen and People Out of Place.

The NYU law student who spoke out against Justice Scalia has more to say.

The quietest room in the world will also drive you crazy.

American citizens’ family members in the Phillipines that applied for immigration to the U.S. the year that I was born would just now be receiving visas.

Aaron Bady on the Supreme Court’s decision regarding strip searches in jails:

If we put aside the fact that US prisons are already hives of contraband — that super-overcrowding in correctional facilities has meant that actual practical surveillance of incarcerated populations is effectively nil — the logic of this argument simply asserts that unwarranted invasions of privacy are a lesser evil than impracticality. But why do we presume that these two things are incompatible? Why must we have one or the other? Where does that necessity to choose come from?

This is why we probably shouldn’t put aside the fact that our prison system is overcrowded and underfunded to an outrageous degree. Because when the Supremes start talking about what is and isn’t workable, what they’re really saying is: we can’t afford to provide the kinds of rights which the bill of rights promises. To say that it wouldn’t be workable to treat citizens in custody as still having the rights that no court has yet ruled to strip away — that “it would be difficult to determine whether individual detainees fall within the proposed exemption” is simply to say that the work of observing constitutional rights, spending the time and money to see that it is done properly, is beyond our powers as a society. It is too difficult. There are, obviously, ways to make prisons more “secure” which do not involve putting a hand in your anus, and if the Supremes mandated that they find them, they would. It’s just that, given the massive overcrowding of our prisons (and the underfunding which flows out of that overcrowding), a hand in the anus is the cheapest way to do it.

Oh, and the aforementioned strip search ruling? Obama’s Department of Justice asked for it.

Koritha Mitchell answers some questions about her book, Living with Lynching.

From Emmit Till to Trayvon Martin: How Black Women Turn Grief into Action.

What do campus police need when dealing with protesters? More force options!

Some analysis on Azawad independence from Mali.

And let’s not forget that the U.S. helped train military leaders in Mali, including the leader of the coup.

On America’s occupation of Australia.

More critiques of Nick Kristof, this time on why we should stay away from his anti-prostitute agenda.

On privacy, secrecy, and transparency from the government to WikiLeaks, or the Fog of More:

But rather than keep fewer records, agencies increasingly used newly invented databanks, the better to build a virtual you. Their computers could pluck out any detail of your life and add it to the government’s central, databanked composite. As a result, Americans were left trying to figure out just who the government thought they were, and thus the first lineaments of the transparency movement stirred to life. It didn’t seek to roll back data collection either; instead it sought new legislation to force government disclosure — i.e., greater transparency of the state rather than protection of individual privacy. The government would keep collecting information, but citizens could see what and why. The Freedom of Information Act of 1966 offered legal tools for processing disclosure requests, and the Privacy Act of 1974 gave citizens greater access to the data collected about them. But in 1997, when Senators Daniel Patrick Moynihan and Jesse Helms co-sponsored the Government Secrecy Act, arguing that fewer documents should be classified and that more documents be declassified automatically over time, the bill died unmourned in committee.

When Facebook reprocesses our personal information, the data miners are generally only trying to sell us weirdly specific products or target ads.  But when the government is concerned, the stakes are different. In 2005, several telecommunications companies were caught supplying personal information to the National Security Agency, demonstrating the dangers of corporate data accumulation. What if the NSA decides it wants full personality profiles of everyone who “attended” #OccupyWallStreet on Facebook? It would be a matter of keystrokes to supply entire “social graphs” for each of them.

The Obama administration has also sought to prevent lawsuits against the NSA’s warrantless wiretapping, no less, by invoking the state secrets doctrine; we are infinitely transparent, while the government is enshrouded, and the complicit corporations too.  It’s for national security. Try filing a FOIA request.

So, abortion survivors are a thing.

Minimum wage is way too low.

A big city writer goes home in defense of Dallas.

Whether your a gun rights activist, a white supremacist, or a police officer – it’s going to be a long, hot summer.

On Tinariwen, Mali, and the Failure of Western Music Media.

The GOP doesn’t think there’s a war on women,  but Reince Priebus isn’t afraid to declare war on caterpillars.