When I saw Paige West and J.C. Salyer’s call to mark January 20th with a read-in of lecture eleven of Michel Foucault’s Society Must Be Defended, I was excited to re-read the lecture in light of the right-wing ascendancy in U.S. politics. As West and Salyer note, this lecture in particular is a useful text now because “it demands we simultaneously consider the interplay of sovereign power, discipline, biopolitics, and concepts of security, and race.” I did my reading a little bit early, because I knew that I’d be busy on Friday, as a series of direct actions were being planned to disrupt the inaugural proceedings (and we were largely successful). This post is partially about Foucault and the read-in, and partially an initial foray into thinking through Friday’s events. More to come, I’m sure.

Foucault’s lecture is critical because of its close attention to biopolitics and sovereignty, something crucial to a number of the issues represented at the direct actions on Friday. As West and Salyer noted, this is a time when “the reaction to activism against persistent racism has been to more overtly perpetuate racism as political discourse, [and] we need to remember and re-think the role of racism as central to, rather than incidental to, the political and economic activities of the state.” Same with sexism, same with xenophobia, same with homophobia, same with Islamophobia. Many of these ideologies are part of the American state in general, of course, but they are all crucial and central building blocks of the current administration’s claim to power. Losing the popular vote by millions, Trump has no real mandate to govern. The only mandate he can lay claim to is a voting bloc built around white supremacists, misogynists, and nativists.

“Sexuality,” Foucault states, “exists at the point where body and population meet. And so it is a matter for discipline, but also a matter for regularization” (251-252). The rise of biopolitics and biopower brought about a new set of technologies that measured and quantified the population that needed to be regulated, in addition to marking the body that needed to be disciplined. Efforts to measure, maintain, and control reproduction and fertility were at the center of this in the late eighteenth century, and continue today as the struggle over the bodily autonomy of women is unfinished.

An important point that Foucault highlights, though, is how “the emergence of this biopower… inscribes [race] in the mechanism of the State. It is at this moment that racism is inscribed as the basic mechanism of power, as it is exercised in modern States” (254). This has roots in settler colonialism and the slave trade, and racism continues to be tied to the state now. The racial logic of biopower leads the state to wage war not against a political enemy but against a racial Other. “From this point on, war is about two things: it is not simply a matter of destroying a political adversary, but of destroying the enemy race, of destroying that [sort] of biological threat that those people over there represent to our race” (257), i.e. for white supremacists, not a war on terrorist organizations in specific locales but a war against Muslims everywhere, not an effort to reform immigration policies but a war to prevent particular races from entering this country, not a war on crime but a criminalizing of black life.

Reading this lecture before #j20, it became readily apparent that the commonalities between the various groups offended, affected, targeted, and attacked by Trump and his supporters lie in the biopolitical. In the first days of Trump’s administration, it is clear just how right those fears are. He has appointed white supremacists to senior government posts, including Customs and Border Protection. He has signed an executive order restricting abortion access that has serious impacts for women’s reproductive rights and health globally, and which promises to actually increase the number of unsafe abortions, in an effort to exert control over women’s bodies. He approved both the Keystone XL and Dakota Access pipelines (which he has stock in), while simultaneously instituting a blackout at the EPA and other agencies. His senior appointments promise to destroy our planet, eviscerate labor, and punish the press for holding his government accountable. 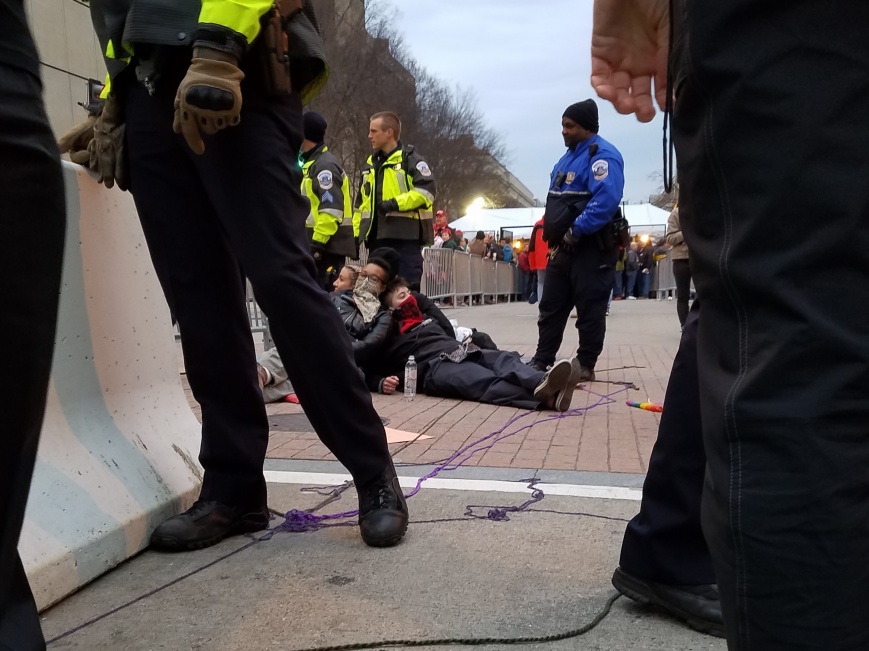 These four people were at the center of a blockade of one of the entrances to the Trump inaugural parade. The Future is Feminist blockade lasted six and a half hours and was just one of over a dozen actions on Friday, January 20th.

On the day of his inauguration, we saw a coalition of activists stand in the way of Trump’s rule. Every single issue-based group involved had good reason to resist a Trump presidency. Women’s rights, black rights, indigenous rights, Muslim rights, and labor rights have been under attack from before the beginning. Climate, anti-war, and anti-police activists have been under attack as well. Certain forms of protest are being made illegal, meaning mobilization against the government will become more difficult. I’m sure I’ll have more to say about Friday, and I’m sure I’ll have more to say as we move into (and push against) this new government. But for now, the key takeaway is that all of these groups and more came together Friday to ensure that there is no smooth transition to an authoritarian regime, to show a refusal to acquiesce, to be ungovernable, to defend society with their bodies and their voices.