I am midway through a weeks-long marathon of watching The West Wing. When I was young, my parents watched the show, and I often watched it with them. Most evenings I watched whatever prime time drama my parents were into, and my wife and I recently began to run through the whole show on Netflix. Aaron Sorkin’s tendency to plant teachable moments throughout what is a fairly fast-paced and often context-riddled dialogue – notorious both in The West Wing and The Newsroom – does two things: teach the intricacies of American politics, both complex and simple, to an audience that may not yet know the details of a filibuster or censure or pardon, and allows those who do know feel a sense of being an “insider” as they follow the main characters down familiar hallways.

Coincidentally, Alyssa Rosenberg at The Washington Post is also watching the show this summer, and wrote a smart piece on the personal politics of the show, focusing on the fact that the main characters’ “positions on policy are — at least initially — determined by their personal attachments.” She argues that “it’s an ingenious way to make viewers feel attached to policy debates. But it also lets the Bartlet administration, which was never terribly liberal in the first place, be guided much more by emotion than any particular partisan theory of government.” I suggest reading her article, as it looks at the show’s focus on personal relationships and on its discussion of media and personal lives. 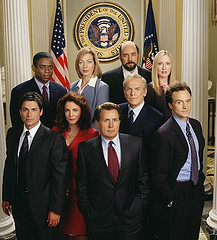 But I have something else I’d like to focus on. In watching the senior staff of the Bartlet administration debate education, drug policy, war, and terrorism, I’m becoming more and more convinced that The West Wing obscures more than it reveals. While the script frequently teaches its audience about the inner workings of the White House and American politics in general, the descriptions and definitions it provides often preclude the viewer from making up her own mind about those very issues. The ideas proposed – recruiting more teachers, supporting international justice, decriminalizing marijuana, selling weapons to repressive regimes, etc. – are introduced not to educate but to show the viewer which one is right (or at least practical, for the latter two realpolitik situations).

The West Wing‘s take on the post-9/11 world is something I’ll have to set aside for another day (that subject will take much, much more time), but here I’m going to outline two specific scenes in seasons 2 and 3. I’m halfway through the show, so it’s very likely that more of these posts are coming. Without further ado, The West Wing, Teach for America, and the International Criminal Court.