I left Gulu on Sunday morning to do a short stint of research and deal with some logistics for an upcoming trip. By the time I made it back to town on Thursday, it was evening and I was tired. I paid my boda driver and grabbed my bags, turning towards my hotel. The lights were off, which had been typical lately with so many power cuts, but the door was shuttered too. I noticed a small 8 1/2″ x 11″ paper posted on the door. As I read about how the hotel I had just stayed in was now closed for renovations, the owner approached me from his seat beside the building. A friend of mine since last year, he apologized and explained that they were remodeling some of the building and were temporarily closed. “You know, with city status coming, we wanted to spruce the place up a bit,” he explained.

Two weeks ago, I went to an open mic show at a cafe in town. In between performances, the emcee thanked several  notable patrons for attending the show. Among them was the owner of the new big supermarket. He mentioned, off hand, that her business gave Gulu “a real supermarket” that resonated with becoming a city.

Gulu town has been inching closer and closer to city status for years, and with it come particular notions of what a city is. I remember back in 2013, seeing news about the removal of thatched roof huts from town, also justified as part of the march to city status.

More recently, a number of buildings are marked for demolition in the name of safety but also in the name of making Gulu look like a proper city. In the Daily Monitor this week, a local division chairperson is quoted as saying, “We are taking this initiative of demolishing the dilapidated structures in preparation for a city status. We cannot have a city with this kind of dilapidated structures.” In addition to several dilapidated buildings deemed structurally unfit by engineers several years ago, several thatch-roofed buildings are slated for removal too.

I don’t know much of the details of what’s been going on in town. I’ve heard stories of how, when the new main market was built, many vendors couldn’t afford rents there but were also being pushed off of land as the old outdoor market was razed. The streets winding outside of town in neighborhoods like Pece are well-paved with sidewalks and medians. It feels like every year when I come back here town has changed quite a bit, and keeps changing.

Demolishing or fixing buildings that are unsafe is one thing; erasing traditional buildings from the urban landscape is another. Gulu will likely attain city status next year. But what does it mean to be a city? What does a city look like? And whose city is it?

A lot of questions remain about the shooting in Gulu town two weeks ago. Unnamed attackers fired on the central police station in town on the 12th, about a month after a group raided a local defense unit outpost in Opit, a small village in the district. Things have been quiet ever since, but the attack left lingering worries about insecurity and concerns about whether the attackers were a new rebel group or criminals. The government’s narrative is that it is mere banditry, a group of criminals trying to free an opposition politicians who was jailed there. Some news circulated of a new group claiming responsibility. Again, it’s all unconfirmed guesswork for many people watching.

For their part, many former LRA commanders have been proactive in denouncing violence. In the weeks since the attack, several of them have taken to the airwaves to speak against violence. This week alone, several have been on the radio more than once. Monday, for instance, several well-known former commanders were featured on the radio speaking about the attack.

The former LRA field commander “Maj. General” Caesar Acellam, says it is very unfortunate that former LRA fighters are being named as those who were behind the recent attacks on Opit army detach and the Gulu Central Police Station.

Speaking over a local radio station on Monday evening, Acellam said the attacks has led to a rise in sentiments against LRA fighters… Acellam cautioned former LRA fighters against being lured into rebellion saying it will drag the region into anarchy.

“Brig” Kenneth Banya, also a former senior LRA commander, in the same radio programme urged former LRA fighters already reintegrated into their respective communities to resist the influence of those who want them to carry arms and fight the government.

I recently spoke with a returned LRA fighter who also took part in one of these recent radio broadcasts. He expressed concern that these recent attacks might be used to try to “provoke” former LRA fighters to “mobilize,” and that their presence on the radio was to help oppose armed conflict. “We do these interviews for peace,” he said. “We wasted our time in the bush, without education; we want a better future for our children.”

These radio broadcasts have a lot in common – not least of which are the stations, presenters, and guests involved – with the come home radio programs that I’ve studied in the past. Using former rebel voices to speak against violence is a frequent occurrence on the airwaves here. Even though war left northern Uganda a decade ago, insecurity looms – these incidents are just the most recent examples (here are some older ones). Radio messages pertaining to bringing LRA fighters home continue, and get relayed in central Africa where those rebels remain. But locally, the program continues within different contexts – with former rebels coming together to speak out against violence, in an effort to stave off war, but also demonstrate their commitment to peace after having been in the bush for much of their lives.

On the bus ride up country yesterday, I read a comment in The Daily Monitor about Gulu municipality’s efforts to claim city status. Gulu town itself is about 150,000 people, but some on the municipal council are trying to incorporate nearby communities to bring the population closer to the 500,000 threshold to achieve city status. The change would give the town more space but also access to more resources. The short comment in the Monitor noted that:

Gulu Mayor George Labeha… has ordered the demolition of grass-thatched housing in Layibi and Laroo divisions as the municipality works towards gaining city status. “Not all residents will be affected, we are targeting areas such as Cereleno, Industrial Area and Limo Sub-ward.” Of course the decision did not go well with some residents, who argue that grass-thatched huts are part of their culture, and development will not force them to abandon them. They added that some of them cannot afford to buy iron sheets.

On the way into town, I saw decent-sized parts of town that are still comprised of grass-thatched huts. The notion that they would have to be destroyed before Gulu could claim city status is a difficult one to accept. As I thought about it, though, I realized that I haven’t seen many (any?) traditional huts in Kampala, despite seeing plenty of informal settlements like shacks and shipping containers. I don’t know how other African cities are, but it sends the message that, in a city, you can have modern poverty, but can’t have homes that are seen to contradict what most think of as “modern.” 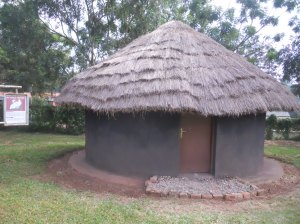 Replica of an Acholi house at the Uganda Museum.

It reminded me of my friend Camille’s talk on slum tourism in South Africa (I live-tweeted pieces of it). During the question-and-answer segment after her talk, someone asked how depictions of townships as authentic Africa influenced African perceptions. She responded that, when asked where “the real Africa” was, whites often referenced the townships while blacks pointed to the rural homelands. From what I’ve seen in Kampala and Kigali and Cairo, cities can be African, but this news from Gulu seems to say that one aspect of being African is not compatible with being a city.

That’s not to say that housing that isn’t a hut isn’t African, just that these houses are also African, and all types of housing should be acceptable for a city such as Gulu. I hope that the municipality can find a way to develop into a city, if that’s what is wanted, without shedding the grass-thatched housing elements of the town.