I’m in the Congo for about three weeks doing fieldwork, after many more weeks of wrangling bureaucracy. A great deal of waiting eventually resulted in me hopping in a humanitarian Land Cruiser with a friend and enjoying a day’s ride that bounced, skidded, and rolled through puddles, humps, and potholes. Much of the drive looked like this, and the fact that we had no issues getting to our destination is due in large part to a skilled driver who knows the road. Along the way we stopped to call NGO headquarters to see how secure the roads were. At one point we passed a group of people with flags, palm fronds sticking up from motorcycles lining the road, as Faradje territory welcomed a ministerial visit (we weren’t it, and unfortunately one person dropped some bright flowers as he made a path for us to pass). With ministerial welcoming committees cleared and the security go ahead, we drove, and along the way we’d pass little army outposts or a truckful of park rangers. Eventually, we arrived in town.

After meeting some NGO staff I was dropped off at a sprawling UN compound, where I’m staying. The parking lot is lined with matching agency Land Cruisers and the perimeter is made up of prefabricated trailers and mobile homes. There’s also a small garden. I was led to my room, dropped my things off, and then wandered. The hallway of the living quarters is plain and sterile, but a few residents have made it their own with little signs taped to their doors, memes and inside jokes. I notice that my room number is thirteen.

A bridge on the road to my field site.

If all goes well, my dissertation research will be on high frequency radio networks that are used by rural communities to alert each other. When we stopped along the way to check about road security, it was thanks to this network. Built in the aftermath of a string of incidents in which the LRA killed hundreds of people, the network is supposed to act as an early warning system and help keep isolated communities connected. Many villages are in the middle of nowhere, stretched out in the dense forest with little road access. Getting word to people is not easy, and the radio network serves to allow operators to communicate. The road here was trying enough, and that was a decent path in an able vehicle. Some roads to villages are only footpaths in the jungle, and some villages are hardly visible through the foliage.

Four years ago I was here for a week and did only preliminary work on the same issues. I wrote a tiny bit about it, and it’s been a small section of my broader work on technology, humanitarianism, and conflict in the region. As I shift from FM radio to HF radio, from Uganda to Congo, from one research project to another, I’m facing a steep learning curve but it’s been good so far. The first week has included listening in on radio rounds, meeting folks involved in one way or another to the network, stumbling through informal interviews in French, becoming more familiar with the terrain, finding a surprise archive of letters, and filling dozens of pages of field notes. Next year, I’ll be back for the long haul, but for now I’m doing all that I can to see what’s possible in an area that I’m not so familiar with. I’m also piecing together fragments of a history.

A century ago, colonial authorities established a cordon sanitaire around the Uele region of Belgian Congo to protect the population from sleeping sickness which was a major health concern in other parts of the colony but not yet in this corner. Movement was restricted, the sick were removed and placed in prisons or quarantined villages that looked and felt like penal colonies (one referred to them as “death camps.” The colonial era letters cited in one article are rife with talking about Congolese as economic assets that need to be maximized. Even amidst epidemic and quarantine, rubber and ivory quotas were strictly enforced.

Half a century ago, some poor colonial officer stranded in the northeast corner of the colony built a large castle. According to Wikipedia, he was tasked with building a two-way bridge, but instead built a narrow one and used the rest to create a chateau. I’m sure there’s more to this story. Fifty years later the castle looks pretty beat up, vegetation is overgrown, and at the foot of it sits the UN peacekeeping office. That a colonial castle has turned into a foreign peacekeeping mission’s headquarters seems like a perfect metaphor, but for what I’m not sure. Down the road trucks rumble as they wait to clear customs and drive on up to South Sudan. 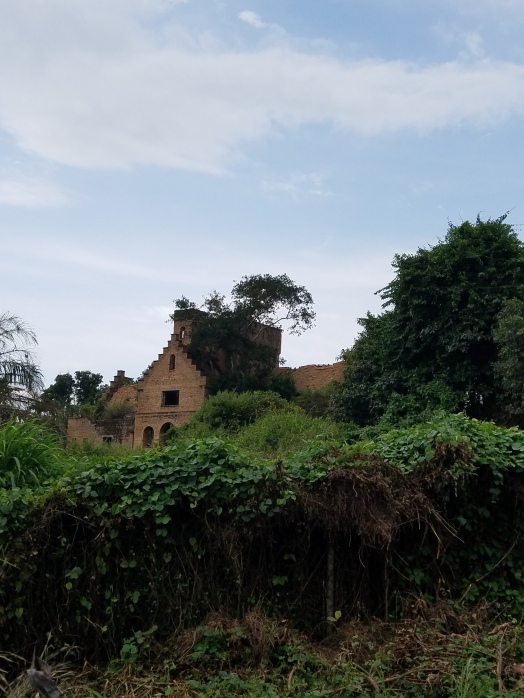 A glimpse of “Dungu Castle.”

Ten years ago this community had virtually no MONUSCO or FARDC presence. Once the LRA set up camp in 2005, things slowly began to change. The national army and the UN peacekeepers gradually deployed to the area – including a botched UN operation against the LRA that left eight Guatemalan peacekeepers dead – but they failed to protect civilians when the UPDF launched its own failed attack on the LRA, setting in motion a chain of events that include the Christmas Massacres of 2008 and Makombo Massacres a year later. It’s in response to these massacres that the early warning network was built, but it wasn’t built from scratch. It was expanded using an existing network of radios between mission stations and towns, and functions in a way somewhat reminiscent of radio networks in Kinshasa that predated the cell phone and telephone.

Technology always has a history, and an ecology. It’s also locally iterative and situated. Not just radio technologies but technologies of protection and security more broadly. Humanitarian technologies, military technologies, communication technologies. Technologies of memory, of connection, of risk mitigation, of preparation, of information. With luck, I’ll find some interesting things out while I’m here.