Early this year the anti-gay group One Million Moms, a branch of the American Family Association, condemned JC Penney for partnering with Ellen DeGeneres. The group targets television shows or companies that violate “traditional values,” from Macy’s (for selling a gay wedding cake topper) to TV shows like The Playboy Club and Glee. They even targeted Wrigley’s for putting the hilarious phrase, “Hey you, we see you unwrapping us with your eyes” inside packages of gum. In February, One Million Moms called on a boycott of JCP for abandoning its customer base of “traditional families” by hiring DeGeneres as their new spokeswoman. 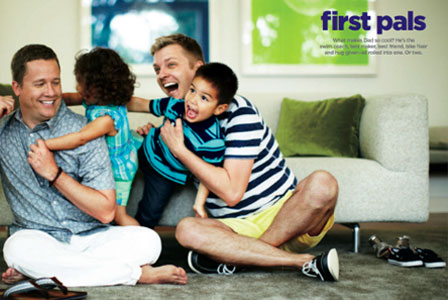 In response, not only did JCP stand by their new spokeswoman, but they came out with an adorable pro-gay advertisement for Father’s Day, featuring a real-life family. The ad features two children playing with their two dads, with the words “First Pals: What makes Dad so cool? He’s the swim coach, tent maker, best friend, bike fixer and hug giver — all rolled into one. Or two.” 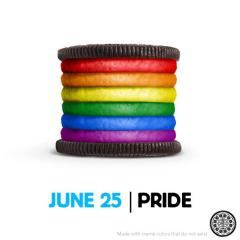 Last week, Oreo posted a picture on Facebook supporting Pride Week, featuring a rainbow Oreo. They were quick to say that it wasn’t an actual product, but were firm in their support for gender equality, captioning the photo “Proudly support love!” The photo has been up for 5 days and already has 284,621 likes. Of course, not everybody liked it, and it didn’t take very long before One Million Moms announced a full boycott of all Kraft products, who apparently think that being neutral means aligning with their views, by saying:

Supporting the homosexual agenda verses remaining neutral in the cultural war is just bad business. If Christians cannot find corporate neutrality with Kraft then they will vote with their pocketbook and support companies that are neutral.

It’s nice to see more companies expand their advertising to be more inclusive and supportive of diverse lifestyles. Here’s hoping Kraft doesn’t budge, and it’d be even more wonderful if they step up and sell some rainbow Oreos – I’d eat a million of those.