Earlier this week I posted some photos of the pre-occupation march and initial occupation at Cesar Chavez Plaza. On Wednesday I returned in between classes for a few minutes and then again in the evening for a few hours. It turned out to be a pretty big night for the occupation. 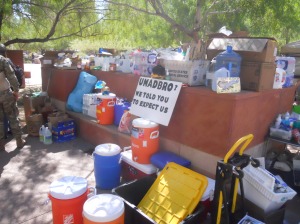 The water and food station near its height.

After the initial confrontation on Saturday, the occupation has been constantly in flux, shifting from plaza to sidewalk. The plaza closes at 6.00 in the evening, and around 5 or 5.30 occupiers pick up and move everything. Cars pull over to load up countless coolers of water and boxes of chips and bread, the first aid station is packed up, everything is taken off site. Protesters remain, but they remain within four feet of the road, on the periphery of the plaza – and they can’t sleep.

In a show of support, several businesses have tried to lend a hand. The Five Guys around the corner has offered its restrooms to occupiers, and those who can patronize there to return the favor. After Wednesday night’s General Assembly a large group walked there to buy dinner, and there was even a proposal to buy cleaning supplies and send crews to clean the bathroom for them as a sign of thanks. A cafe called Conspire has been a hub since the beginning, gathering food there even before the occupation began. On Wednesday there were rumors of the cafe extending its hours to allow occupiers to use the internet and get some rest. 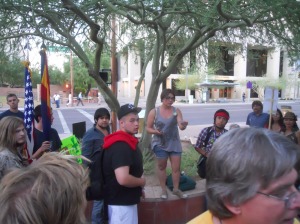 On Wednesday, as it got closer to closing time, we began to pack things up. As we loaded water into a truck there was a sudden call for a time-sensitive GA. The police had decided to stop enforcing the plaza closure. It’s hard to say whether it was pressure of the City Manager (who had been somewhat shamed at a city council meeting earlier that morning when occupiers stated that he could have prevented the mass arrests Saturday night by giving an earlier warning) or from police department worries about putting sleep-deprived people on the edge of the road in the middle of the night, but either way they made their decision. We discussed the caveats as a group – sleeping would still be prohibited and no-camping rules were still in effect, and we were trying to figure out where that line fell.

That night, someone brought a kettle of warm pasta, which was a well-received change from the peanut butter sandwiches and chips that we had been eating. More and more people flowed in as we prepared for the general assembly. The number of occupiers has big spikes and lulls, like I’m sure many occupations have. Compared to what I’ve heard from people in New York and Oakland, the occupation in Phoenix doesn’t have the community feel just yet. It might be because there had been so much back-and-forth in the first few days. Last Saturday there was a market place and a library, but both seem to have been shelved during the move. Despite having lasted six days now, when I was in the plaza it felt temporary. During most of the day the plaza had one gazebo, a bench, a computer, and a collection of coolers – the rest was people and food. The authorities must be happy with this – it looks more like a birthday party at a park than a politically engaged and self-sustaining community, if not for the countless signs. But with the plaza opened indefinitely, I hope to see the occupation grow. 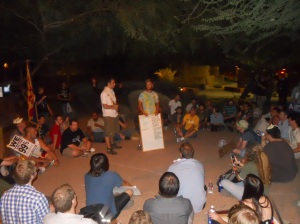 It seems that the authorities are already trying to stymie the growth. As the police presence dwindled on Wednesday, the sergeant on the scene discussed with a couple of us some of the finer points of what would be allowed and what wouldn’t be. Right as he left, he told me that the media center – a desktop computer under a tree running the livestream – was borderline and might have to go.

This afternoon, the power to the plaza was cut, shutting down the media center and anything else the occupiers had plugged in. There are a handful of car batteries and two solar panel chargers, but the occupiers don’t have enough to provide power to the whole plaza. In addition (and maybe only because the power is out) the city WiFi network usually available at the plaza is also gone. The occupiers are currently marching, and there is a campaign going to call the mayor to convince him to turn the power back on. Meanwhile, it seems that while the plaza may be open to the occupiers to stay in, they won’t be able to sleep, camp, cook, record, connect, or organize. The city gives, but the city also takes away.