Occupy Phoenix has begun this week, although it’s had a rough time. I was only there for the very beginning, but plan on returning tomorrow and give you all another post. Here are some photos from days 0 and 1, followed by a short run-down of what I’ve missed.

Last Friday, there was a pre-occupation march through downtown Phoenix. It lasted a few hours, replete with lots of chanting at numerous locations before ending at Cesar Chavez Plaza, where a group of Arabs were demonstrating against Syrian President Bashar al-Assad. The two groups joined up pretty seamlessly before an occupier read the Occupy Wall Street declaration and a band played some anarchist acoustics. 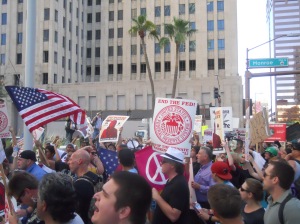 Outside Chase Tower, chanting "Chase got bailed out! We got sold out!"

Protesting outside the BofA at Collier Center

This is only about half the crowd (I was in the middle) headed towards Cesar Chavez Plaza.

The Syrian demonstration is joined by Occupy Phoenix.

Saturday, protesters returned to Cesar Chavez Plaza to begin the occupation. I arrived about an hour and a half after it began, and missed the armed presence of a local militia, which caused some controversy. What I saw was a small but thriving community. I didn’t get photos of everything, but there was a main circle of speakers outside City Hall, surrounded by smaller circles, a book store, a “free” market, a food table with bagels and pizza, a water station, and people signing petitions for an open primary. The whole plaza was well over 1,000 when I was there, I heard 2,000 quite often.

Speaking outside of Phoenix City Hall 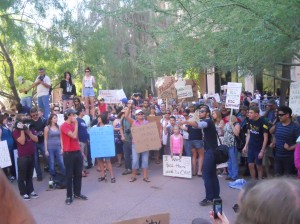 Speaking about nonviolence in a smaller circle.

Everything else I know is from Twitter, the Downtown Devil’s Saturday coverage, and the livestream. Saturday night the crowd marched from the Plaza to Margaret T. Hance Park to set up camp. Phoenix Police warned that anybody in the park when it closed would be arrested. After initially claiming to be leaderless, the Occupy Phoenix crew eventually designated representatives to meet with city officials to negotiate a lawful occupation. It was around this time that a rumor circulated that Phoenix Mayor Phil Gordon said that if the police arrested the protesters, he would come out to get arrested. In the end, the negotiations collapsed and the mayor never showed (later stating that his support was behind civil rights groups and anti-SB1070 groups). Police gave four warnings before marching in and arresting about 30 protesters, leading to this epic photograph.

A photo circulating on Twitter: Police close in on protesters on Saturday night.

Monday’s protest was generally subdued. The occupation moved back into Cesar Chavez Plaza during the day, and was prohibited from sleeping on the ground at night. Protesters were mobile on the sidewalks of downtown, with live music and lots of coffee.

So far, today has seen a lot like yesterday from Twitter and livestream. For this evening’s general assembly, the protesters moved to a county island a block away from Cesar Chavez Plaza. This way they were able to conduct the assembly without worrying about Phoenix PD getting involved, although there were worries that the Maricopa County Sheriff’s Deputies might make an appearance to enforce loitering laws. I heard something about the Phoenix City Council meeting tomorrow regarding urban camping ordinance, and some plans to take part in that, although I’m not sure if it’s a protest or actual involvement in speaking at the meeting.

That’s all for now. More tomorrow!